Through Finland in Carts by Mrs. Alec Tweedie

Next: How Finland Works: Highways 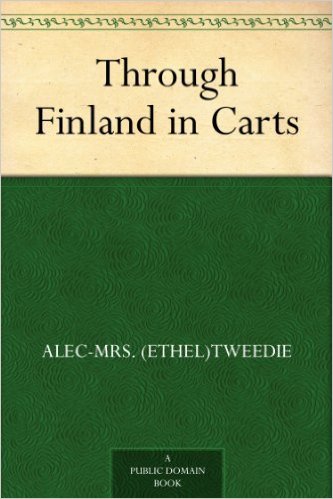 I’ve just read a book by some Mrs. Alec Tweedie, an English woman who travelled around Finland in 1897. She had previously been to Iceland and Norway; and all of these three countries were as far from popular tourist destinations as possible at the time. Mrs. Tweedie, a woman in her late thirties, recently widowed, went to Finland for three months, with her sister and a local companion, communicating with the locals mostly in German (whenever at all possible; although Finns speaking excellent English were occasionally encountered in surprising places). The book, named Through Finland in Carts, is available for free now in Kindle Store (in fact I stumbled upon it when I just tried typing “finland” into Kindle search). It is the 3rd edition, published in 1913, and containing many notes on the changes in Finland since the time of the actual travel.

Overall I wasn’t a great fan of Mrs. Tweedie’s prose. It seems a bit amateurish and the author is obviously trying too hard at times (although I do admit it strongly reminded me of Three Men in a Boat, sans humor; and Three Men in a Boat is a great book). Still, it was an extraordinarily interesting read for me, since I’m such a big fan on Finland. Mrs. Tweedie she actually paints a very good and fairly complete picture of Finland on the eve of the 20th century, even going to some lengths to describe not only the sights or the people, but also the industry, the agriculture, and in general what the people actually do for their living. So I’ll try to summarize some of the most interesting details mentioned in the book.