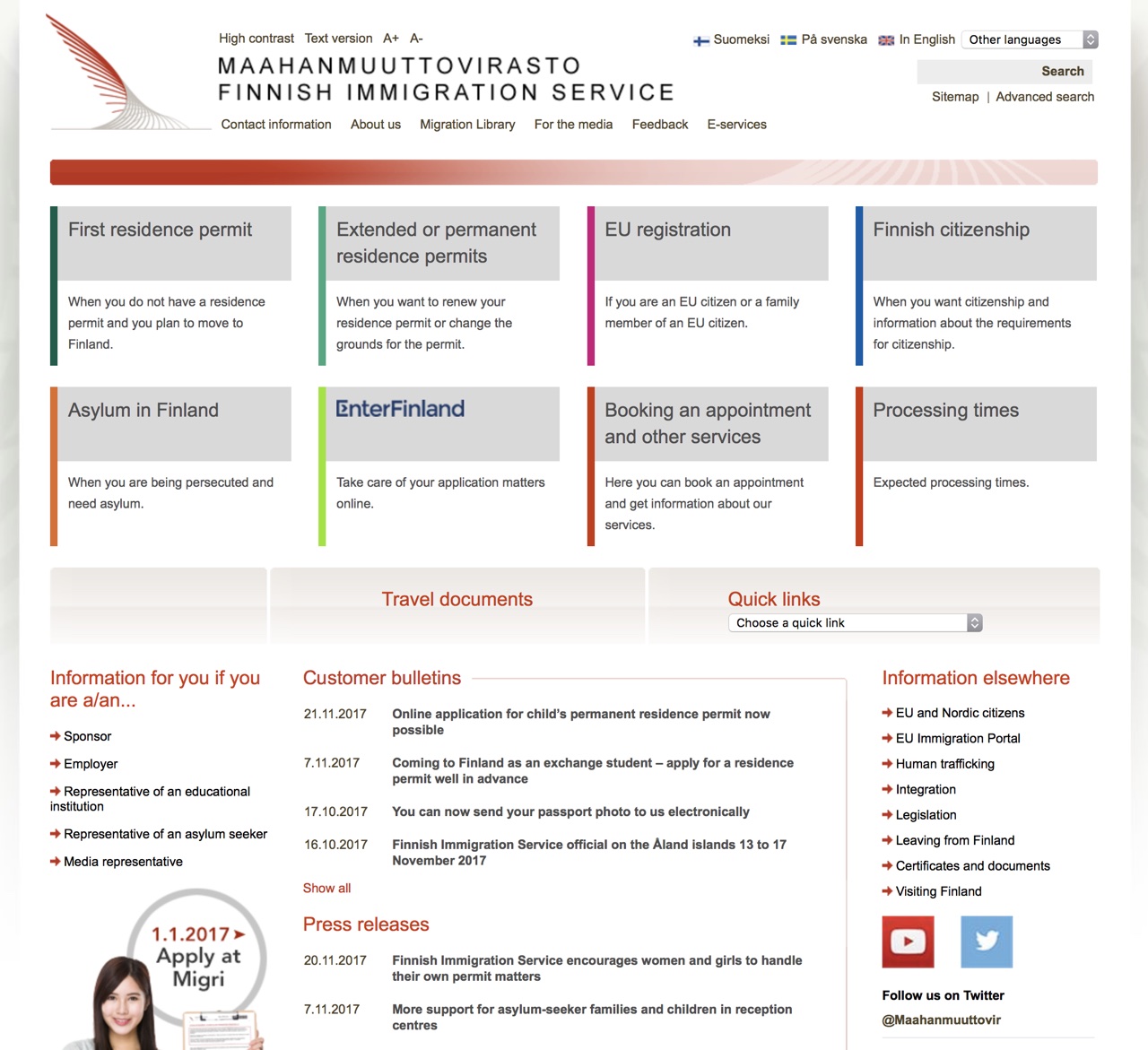 Previous: Why Move to Finland

Let’s start with reading up a bit on the theoretical part: what do you need to legally live and work in Finland (of course it doesn’t make sense to even consider “illegal” options). In principle you need several papers for that, but there’s only one that’s really important (and which gives you access to others once you’re in Finland): a residence permit (oleskelulupa in Finnish). It is also sometimes known as work permit or work visa, but we’ll use the official term to avoid confusion.

A residence permit is a document issued by the Finnish Immigration Service (Migri, or maahanmuuttovirasto in Finnish), which allows you to enter Finland just like a visa does. But unlike a regular tourist visa it gives you much more rights there, including the crucial ones: the right to have a personal identity number, and the right to work. And of course a visa, even if issued for 2 years (the maximum usual duration of a Finnish tourist visa), only allows you staying there for 3 months each half a year, while a residence permit naturally allows you to reside in Finland throughout its validity period, and can be prolonged then. By the way, visas are issued not by Migri but by Finnish consulates abroad, which are parts of Finnish Ministry of the Foreign Affairs. So you shouldn’t go to Migri for visas and vice versa.

Physically, a residence permit is a plastic card. I already showed mine in the previous post. These used to be papers glued into your passport, like visas are, but these days they’re separate from the passport, so if you lose the latter or get a new one issued, the card still remains valid. You still need both a card and a passport to cross the border. These cards now have a unified design throughout Europe (including at least EU countries and Norway), and they have a bull drawn on them that stands for Europe (think Zeus and Europa’s abduction). For some reason there’s also a bear drawn on the reverse side. Other countries do not draw anything there but Finland has a bear. This kind of tells you a lot about Finland. (I won’t show you this bear because the reverse side actually does have some sensitive information, including the personal identity number, which is definitely not supposed to be public.)

There are quite a few various grounds for getting a residence permit, although unfortunately “I just love Finland so much” is not one of them.

(*) Not to be confused with Ingrian Finns immigration program. Ingrian Finns (inkeri) are ethnic Finns who lived near St. Petersburg on lands which never belonged to Finland, and thus do not actually have Finnish citizens as ancestors. These were also allowed to move to Finland but this program is closed not, but if you actually have Finnish citizen ancestors you’re still eligible.

There are more exotic grounds as well. However, owning real estate or any other property in Finland is not one of them! The only EU country which still has that loophole is Latvia (okay maybe some other countries still have it too, but the sums they demand are totally ridiculous.) You can read for yourself: http://www.migri.fi/residence_permits. The Russian version of this post has a disclaimer that you have to know English to read Migri’s website, but if you’re reading this hopefully you already do.

I’m of course moving there as an employee (of “special expert” kind), and that’s the only scenario I actually have first-hand knowledge about. You can try googling success stories using other grounds — I’m sure there are some 🙂

Oh and of course if you’re already a EU citizen, things are much easier for you. I do not know the exact rules in that case, but Migri website has them.

Regardless of the grounds of getting a residence permit, there are just three kinds of them: A, B, and P.  A is “continuous”, B is “temporary”, and P is “permanent”.

The most common category of people who get a B-type permit are students (and I think workers too, if you have a fixed-term contract valid for less than a year). It’s not really a proper permit. It doesn’t allow you to use Finnish healthcare and social security systems, and usually you cannot even register at a permanent address in a Finnish municipality. It also doesn’t entitle you to “upgrade” to A or P-type permits, no matter how long you had B-type permit(s). (However if you graduated from a Finnish university with a B-type permit, it can be extended for up to a year while you’re looking for a job in Finland, and once you find one it can be converted into an A-type permit using a simplified procedure.) We won’t talk about B-type permits anymore. Although of course I was 20 and had a lot of money, I absolutely would have gone to study in Finland, why not.

A-type permits are issued for 1-4 years, and they already give you most of the rights that the actual Finnish citizens have. These permits can be prolonged, if the original grounds for getting them are still present; in practice the first permit is usually granted for 1 year, and the second one is for 4 years already. These permits generally grant you a right to work in Finland, but possibly with some limitations. As an employee you’ll get an A-type permit, perhaps with a limitation to work in a specific field. But you are allowed to change jobs within that field.

At least if you get an A-type permit as an employee, your spouse and/or children will also automatically get A-type permits, provided of course you didn’t forget about them in your application. And in fact their permits will give them even more rights, with no limitations on work fields, and even entitling them to unemployment payments. But of course these permits will be prolonged only conditional on your permit being prolonged. (Or of course your spouse can dump you and get his/her own work permit, as an employee or on whatever other grounds they can 🙂 )

Instead of national work permits you may also apply for a so-called EU Blue Card, which is a special expert residence permit granted under a EU-wide program. Getting a Blue Card is a bit more difficult, and in Finland at least it has no advantages over the regular residence permit whatsoever, so there isn’t really any point in applying for one. (This might be different in other countries.)

Having lived in Finland continuously for 4 years with A-type permits (not B-type), you can apply for a P-type permit.  P means “permanent” (well actually pysyvä but it means the same thing). With a P-type permit you are no longer required to do anything in particular, so you may spend the rest of your life unemployed and drinking Koskenkorva if you feel like it. It doesn’t need to be prolonged (well the actual card needs to be changed from time to time but that’s a purely technical detail), and you can lose it only if you commit a crime or move away from Finland permanently (for 2+ years).

By the way, “continuous residence in Finland” of course doesn’t mean that you literally have to be in Finland all the time and can’t even go for a vacation abroad. Every year you can spend up to half a year in any tourist trips, and even more than that if you specifically notify the authorities.

With time you’ll be eligible for the Finnish citizenship (and passport). The criteria are:

Citizenship is forever, and it cannot be lost under any circumstances (the only theoretically possible one is if it somehow would come to light that you originally got this citizenship on invalid grounds such as forged documents(*)). With it you will be able to visit or live in other countries with the same rights as the Finns do (a Finnish residence permit, as far as other Schengen countries are concerned, is like a tourist visa — you can visit but not stay). Unlike many other countries Finland doesn’t require you to give up your original citizenship, which is a huge advantage for many. But you can of course, if you really like.

(*) Curiously enough, if you have been a Finnish citizen since birth, you actually can lose it automatically when you’re 22, provided by that time you’re already a citizen of some other country too, and do not have any ties to Finland anymore (do not live there, haven’t lived there for at least 7 years of your life, and haven’t finished the military service there). Although even in that case you only need to fill out a simple application to avoid losing your citizenship, so you’d have to be really stupid to lose it like that.

As a citizen you will also be allowed to vote, because that’s what you wanted all along, didn’t you. Without citizenship you can only ever vote in municipal elections (if you lived in Finland for at least two years). Actually these are fairly important too, as they affect your everyday life directly.

But anyway, citizenship is quite a remote prospect anyway, so let’s get back to permits.

Normally you have to apply for your first residence permit outside Finland, in person, in any Finnish consulate (not in a visa center). In principle you can also do this directly to the Immigration Service while being in Finland on a tourist visa, but for some reason they really don’t like that. The application and attached documents must be in Finnish, Swedish, or English; if it’s in Russian or any other language, you’ll need to make authorized translations. Although in principle it should be possible to make an offline application, these days you can normally do it through https://enterfinland.fi/eServices, which is quite convenient, although you still need to visit the consulate them (to show them the original documents and provide your fingerprints). There is a fee for making an application, and it’s quite significant (much bigger than a visa fee), but not outrageously so; €450 in case of a “special expert” in particular. If you’re applying as a future employee, it can be paid by your employer, which is how it was in my case. Of course the fee is not refunded if the permit is refused.

In general I’d say the whole system is actually quite a simple and logical one, and fairly friendly to the immigrants (it’s not like the US with their H-1B work visas for sure!). Preparing the necessary documents and actually applying is also rather simple, and I could do it without any real difficulties. My employer was also doing this for the first time ever, having never hired foreign workers before.

And I can also say that the peculiar feature of the Finnish state is that it really does want to help you. Of course it’s not perfect but it’s there for you, rather that to swindle you somehow or to trap you in some bureaucratic details. It also generally trusts you (whenever possible), and it’s a very good idea to try to be as honest with it as possible yourself. All of this was already noticeable even on this stage. And for a Russian person this really was a really weird and novel paradigm 🙂