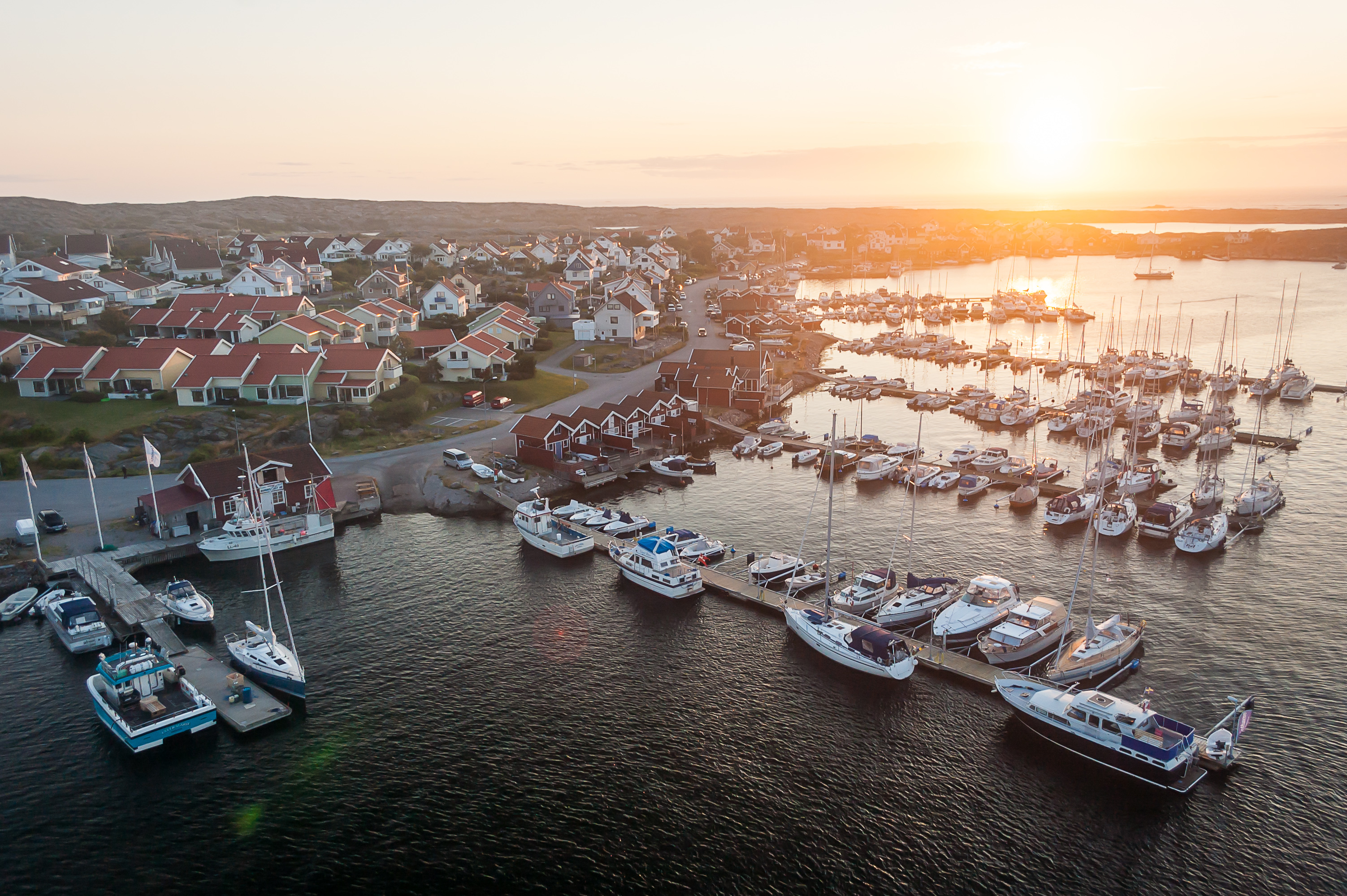 Previous: XI: Carlsberg, Malmö, and the drive to Bohuslän

The southwestern coast of Sweden, from the city of Gothenburg up to the Norwegian border, is known as Bohuslän, after the castle of Bohus in Kungälv, 20 km north of Gothenburg. Up until 1658 Bohuslän used to be a Norwegian land, protected against Sweden by Bohus. Sweden secured Bohuslän in the Treaty of Roskilde, along with Scania and other territories, and since then Bohuslän has been Swedish.

Bohuslän (formally a part of Västra Götaland län, same as Gothenburg) has no major cities. It has always been noted for fishing; unlike the rest of Sweden, it is washed by Skagerrak Strait, a part of the North Sea, which has much more lively and varied sea life than the Baltic Sea, with crabs and lobsters and the like. There is a large rocky archipelago along Bohuslän coast, a maze of skerry islets. Bohuslän also used to have great forests, but these were cut down for shipbuilding long ago, and never recovered.

Modern Bohuslän is pretty much a great summer resort. One of its better known towns is Smögen, located on an island off shore and known for its fish auction. We stopped at Smögen Camping, in the town of Kungshamn right next to Smögen, and spent a full day exploring Smögen on foot.

This is where Smögen is located on the map, if you’re curious:

1. Smögen Camping in the morning.

3. Walking to Kungshamn (and then to Smögen), about a kilometer from our camping.

4. As I mentioned before, Kungshamn literally means King’s Landing. Although this place is not really associated with any kings as far as I know, and the name Kungshamn was invented as late as the 20th century.

5. Kungshamn houses. The town is a vacation place, just like Smögen. The houses are somewhat uniform, but very nice.

6. Smögen, as I said, is an island, connected to Kungshamn with a rather large and high bridge. Walking on Smögen Bridge, you can get some great views of Kungshamn and the strait separating Kungshamn and Smögen.

8. “Smögen” sign greeting you right after the bridge. Smögen consists almost entirely of the same kind of rather large one-family homes as Kungshamn, all plopped down on an island which is basically a huge rock, with almost no trees and very few patches of grass. Smögen’s own population is just 1300. Along with Kungshamn, it belongs to Sotenäs Municipality.

11. The touristy part of Smögen is called Smögenbryggan, basically Smögen Pier or something like this. It is a long pier going along a deep narrow inlet, with old fishermen cabins turned into restaurants and tourist shops. Those cabins which have not yet been turned into a restaurant or a shop sometimes have a Rum (room) sign in a window.

12. Fishermen supposedly unload their catch at the pier very early in the morning. Some of it goes to Smögen Fish Auction, held in one of the buildings. The auction is not that exciting nowadays, as most transactions are done over the Internet rather than in person. Anyway the auction also takes place in the morning, so we didn’t try to see it.

13. The restaurants. We picked a place named Ekelöfs; it was more like a seafood store with a bistro than a real restaurant. The interesting thing about Smögen is that restaurants here have menus in Swedish only. Waiters speak English, of course, but you can’t find a line of written English in Smögen. What’s even more interesting is that this was the only place in Sweden where we only ever saw Swedish tourists. All the faces were white, most of them actually looked Swedish (blonde and all), and all the license plates of all the cars we saw there were from Sweden, with a tiny sprinkling of Norway. Absolutely no Germany, Denmark, Poland, or Baltic countries; these were common around the rest of Sweden. So it appears we accidentally picked a 100% Swedish getaway which no one else was supposed to know about.

14. Sadly I’m not a fan of seafood (you really have to be a fan of seafood to appreciate this place fully). I got some fish and chips, and for the rest of our stay in Bohuslän I just asked for burgers, which were nice enough but certainly not very unique.

15. This is what I’m talking about. That mountain of stuff cost 300 SEK if I remember correctly. You get a ton of shrimps, some Norwegian lobsters, a European lobster and a crab, and a few oysters and mussels.

16. My friends claim that these guys are the tastiest. They are called Norwegian lobsters, or langoustines. There are lots of crustaceans in salty Skagerrak waters, while all the brackish Baltic Sea has is some boring cod. Commercially, I think Norwegian lobsters are the most important species as well. Visually of course huge European lobsters and brown crabs are cooler. You can get raw crabs for 25 SEK a piece in a nearby store.

19. You can get a few boat tours here, although we were a little low on funds for that. There is a tour to Hållö island with a lighthouse for example, and I think there are boats which allow you to try shrimp/lobster fishing for yourself. You basically throw a cage trap into the water and hope for the best.

21. The waters all around Smögen were chock full of jellyfishes. I’m not sure if I ever saw a jellyfish before. Not in the wild, certainly. Dozens of jellyfishes, many of them apparently dying or dead, and huge seaweeds make coastal waters look dirty.

24. This picture shows all three separate kinds of jellyfishes I noticed.

26. About a half of Smögen area is built up. The rest of the island is mostly bare rock, with several short nature trails. One of the trails goes to the island of Kleven, which is separated from Smögen by a very narrow strait, just a meter wide.

29. And this is the part of Smögen/Kleven which faces the open North Sea, or rather, Skagerrak Strait. It is very salty, with strong surf.

33. There are even a few beaches, if you don’t mind very cold water and jellyfishes. Some Swedes didn’t. We did, so we just lay there in the sun for an hour or two.

34. Going off to explore some more. Some wooden footways nailed to rocky cliffs along nature trails.

35. One of relatively rare grassy patches.

38. A rock drawing. Maybe it’s just some graffiti, maybe it’s an ancient one. Smögen, along with other Nordic countries, has some ancient rock drawings. They usually get highlighted with modern red or white paint so you can actually see them.

41. The thing to the left is a water tower. Huge concrete water towers are often the tallest structures in many smaller Swedish and Finnish towns.

43. View of Smögen from the water tower.

44. Finnish and Swedish homes sometimes put up a pennant of a pole. Swedish pennant has the exact same design as ordinary Ukrainian flag, which I found mildly amusing. (And some Swedes fly this pennant with the yellow stripe on top, perhaps specifically to avoid confusion with Ukraine.)

47. Returning to Smögen Bridge after a dinner at Smögenbryggan again.

48. Evening views from Smögenbron. Abba Seafood factory (the one next to our camping) is visible behind a huge rock to the right.

50. We enjoyed the day at Smögen a lot, as it really felt like the first day we weren’t in a rush to leave at some specific time or visit some specific place. The next day, we planned to explore a similar nearby town called Lysekil. To be continued.