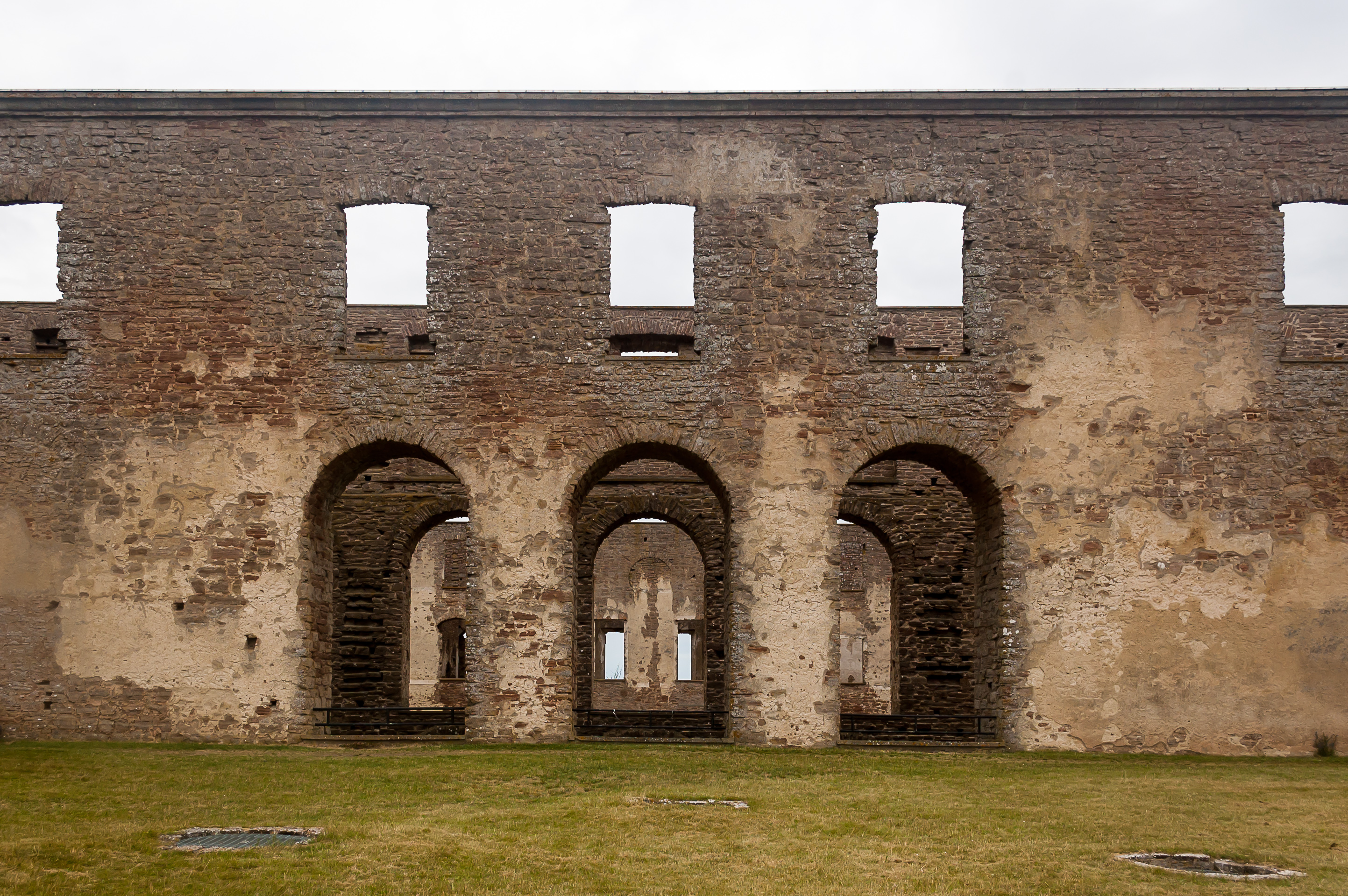 The Castle of Borgholm was one of the sights we wanted to see on Öland. It is a ruin of an ancient castle, probably originally built in the 12th century, and rebuilt many times over. The purpose of the castle was quite simple: to defend the Strait of Kalmar, mostly from the Danes. Borgholm (Swed. Castle Island) saw most of its fighting in the Kalmar War of 1611-1613. The war was caused by the Swedes being unwilling to pay tolls to Denmark for ship passage through Öresund Strait (out of the Baltic Sea, basically), and attempting to establish new land trade routes far in the north, through Norway, which was a part of Denmark at the time. The Denmark had the upper hand in the war, but their victory was far from certain. In the end Denmark agreed to grant free passage to Swedish ships, and Sweden paid ransoms for castles conquered by Denmark, and renounced its claims to the Norway north. The castle of Borgholm in particular was conquered by the Danes, reconquered by the Swedes, reconquered by the Danes again, and then ransomed by the Swedes after the war, taking heavy damage in the process. After that, the castle took its modern shape, designed by architect Nicodemus Tessin the Elder, but fell into disuse soon, and was destroyed by a fire in 1806. The castle ruin remains a popular tourist destination. Like Vasa Ship Museum, we found the castle more interesting than we originally thought.

1. Tourist information board near the town of Färjestaden, Mörbylånga Municipality. It has a nice map of the island, narrow but stretched for 150 km from north to south. The town of Borgholm is the center of Öland, and the castle ruin is just outside the town. The drive from Öland Bridge to Borgholm is about 20 km.

2. So off we go! My trusty cheap LG Optimus L5 II Dual phone with TomTom application served us as a GPS navigator throughout the trip. I kinda like it, as I tend to like boring inexpensive things. It’s annoyingly slow sometimes and has very little memory though.

3. Apart from Borgholm and other castle ruins, Öland is known for its landscapes, which are unusual for Sweden (which isn’t really known for interesting landscapes, in general). Stony plains known as alvars, with little soil and sparse vegetation, are very common. The largest stretch of alvar on Öland and indeed in the entire Europe is called Stora Alvaret (Swed. literally Great Alvar), designated as a UNESCO World Heritage Site, and also known for the fort of Eketorp, a really ancient fortress dating to 400 AD. Stora Alvaret takes up most of the southern part of Öland. Sadly we didn’t have the time to go there, but we still saw some similar plains from the car. Grazing cows are very common throughout the island.

Apart from Öland, alvars can be seen on another large Swedish island of Gotland, and, perhaps a bit surprisinglty, throughout the north of Estonia (which as far as I know is not known for natural attractions either).

4. The main road on Öland is called Road 136, going in a circle aroung the entire island. The road is an ordinary 1+1 road, and, unexpectedly, it was the most congested road in Sweden we saw. There is very intensive tourist traffic, with lots of motorhomes, and in villages it occasionally slows down to a halt due to intersections or pedestrian crossings. Simply entering the road to the left may take up several minutes, yielding to everyone from both directions.

5. Still, it didn’t take long to reach the castle. There is a large parking lot and a souvenir shop. Entrance cost 95 SEK.

7. Entering the castle. The castle is square, with large round towers in the corners. The castle building is surrounded by star-like bastion fortifications from the south and the east. A mansion called Solliden Palace, serving as a private summer residence of the Swedish Royal family, is just a few kilometers nearby.

9. The courtyard. A guided tour is ongoing.

12. The castle is quite photogenic.

15. A stairway leads up to one of the bastions (the southern one). Other bastions can be reached from this one. The castle is built on a cliff overlooking the Kalmar Strait, visible on the horizon here, although there is about a kilometer of forest in between. Bastions therefore form artificial cliffs on the more gentle southern and eastern slopes.

16. Information tables in English and Swedish tell about the history and the architecture of the place.

18. Another bastion, with a few holes covered by iron grates.

19. Huge doorways lead here from the now-destroyed castle second floor. This bastion apparently used to be a front porch of sorts.

20. From the last bastion you can walk on top of a wall stretching further north. The wall surrounds an outer courtyard and ends with a small tower, housing a large stove. Its chimney is visible on the top of the tower.

21. The small town of Borgholm (pop. 3000) is about a kilometer to the north of the castle. The town as far as I know is not particularly notable by itself.

22. The outer courtyard holds an old building, the purpose of which I don’t remember now, and also a playground where you can try shooting from a bow or cooking pieces of flatbread on an iron sheet on an old stove.

23. A somewhat better-preserved wing of the castle seems to hold a museum of sorts.

24. I have no idea whatsoever what this stuff in the “museum” is, though.

25. Other rooms of the “museum” are even odder, like this one with a few crude model airplanes.

26. Now, this one is easy to understand! Sit on a throne with a sad lion face and take pictures of yourself! We made lots of these.

27. Stocks at the corner of the outer courtyard.

28. A stove in the outer courtyard tower we saw before.

29. The most magnicent castle resident.

30. After examining the castle and eating Swedish meatballs at the castle restaurant, we drove on to the north, intending to reach Långe Erik lighthouse on the northernmost tip of Öland. To be continued!