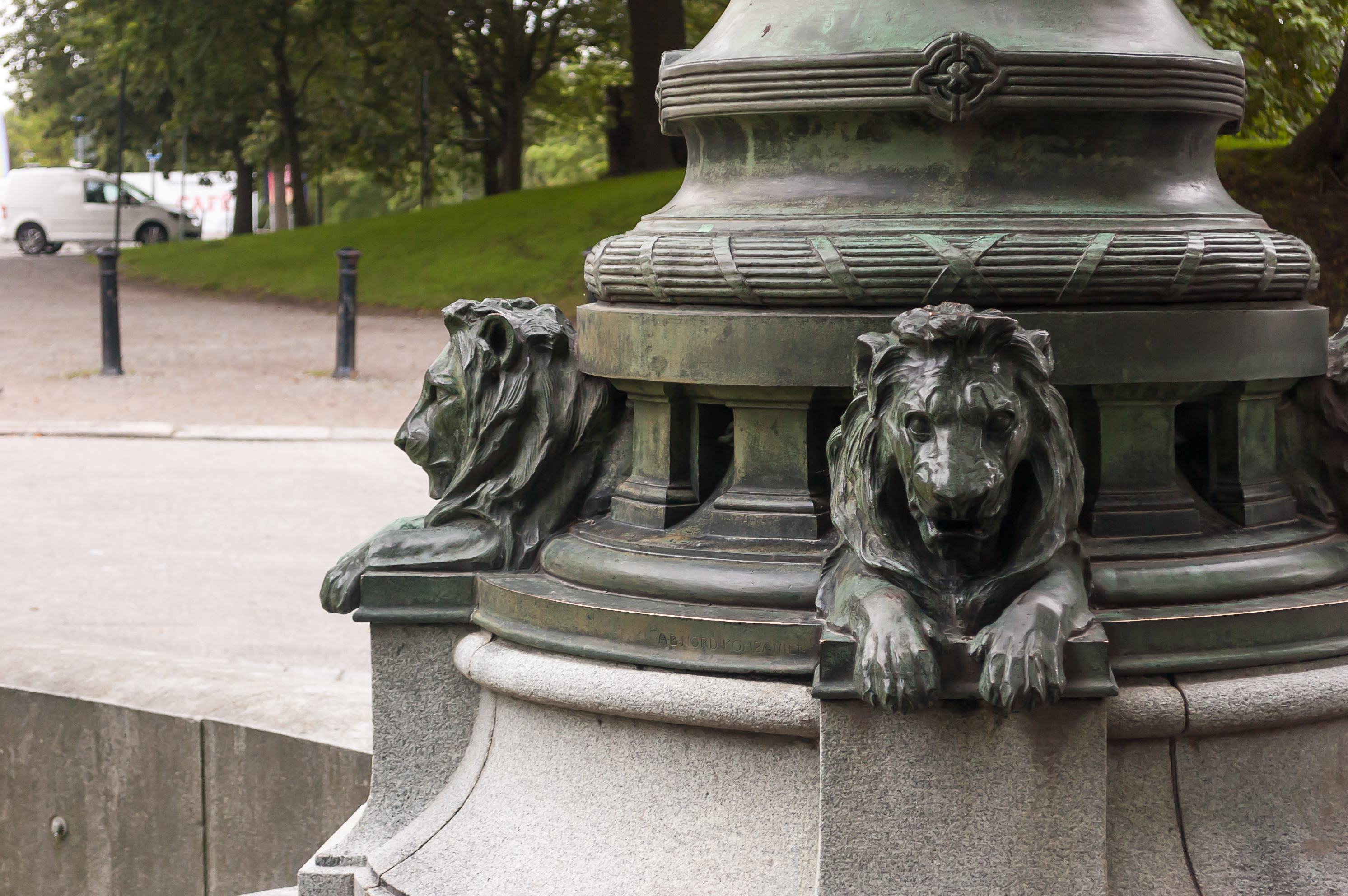 Stockholm, the capital of Sweden, is also the largest city of the Nordic countries overall, with population of 920,000 (2.2 million metropolitan area). It also happens to be my favorite (large) city in the world, so far (edit: as of 2018, I like Helsinki better). Last year, we visited Stockholm and explored its Old Town (Gamlastan), and some of its Norrmalm and Södermalm districts, so this time we chose something different, deciding to start with the island of Djurgården.

Djurgården (Swed. Game Park) is an island in the eastern part of Stockholm, home to many parks and museums, including Vasa Ship museum, Skansen open-air museum, Junibacken the museum of Astrid Lindgren, Gröna Lund the amusement park, and many others. Historically, it indeed used to be a Royal game park, which transformed to its present state towards the second half of the 19th century. There are bridges to Djurgården, and a very short ferry line connecting it to the Stockholm Old Town.

We arrived to Stockholm at 6:30 local time, which is way too early for pretty much anything, and decided to drive to Djurgården and walk around for a while until some museum opens. We had plans for Skansen and Vasa Ship museum, but ended up visiting only the latter.

2. Merge onto the Stadsgårdsleden street, squeezed between the waterfront area with its ferry terminal, and a tall vertical rock wall. Most of the Södermalm district is located up there.

3. Driving through Stockholm downtown. I used to feel very nervous driving in central parts of large unfamiliar European cities, but I think I’m getting a hang of it now. The important part is that your navigator doesn’t decide to lose its GPS signal in such a place.

4. I’m still occasionally taking some wrong turns, of course, like the turn to this side street.

6. I left our car at a parking lot in the middle of Narvavägen boulevard, presumably named after the town of Narva on Russo-Estonian border (and a site of a major battle between Sweden and Russia in 1700, which Russia infamously lost, prompting Peter the Great to undertake massive reforms of the Russian army). This parking lot is free on weekends (it was Saturday). It got entirely filled up in a few hours, but at 7 in the morning it still was nearly empty.

7. The main landmark of this street is Oscarskyrkan, Oscar’s Church, built in 1903 and named after King Oscar II, who laid down its foundation stone.

8. Some shop window on the way to Djurgården. That’s a quite decent painting of Stockholm, actually.

9. Djurgårdsbron, the main bridge leading to Djurgården. A beautiful bridge built for the Stockholm World’s Fair of 1897, it is adorned by statues of Norse gods: Thor, Freyja, Frigg, and Heimdall.

10. A look back to Narvavägen from Djurgårdsbron bridge. Note the direction sign Centrum to the right. Swedish, in general, is a much simple language than Finnish when it comes to guessing what an unfamiliar word means. In Finland, you’d see signs for Keskusta, which is what “center” is in Finnish. Finnish generally has very few words in common with any other European languages (being from a totally different language family). On the other hand, Finnish is always pronounced exactly as spelled, while Swedish is fairly non-intuitive in that regard. For example, k in words like kyrka (church) is pronounded like “sh”.

11. Strandvägen, as seen from Djurgårdsbron bridge.

12. One of the first buildings you can see on Djurgården is the Nordic Museum (Nordiska museet), dedicated to the history and ethnography of Sweden. The palace-like building was constructed specifically to house this museum.

13. Look closely at the bottom of the picture. There is a huge flock of black geese just walking around! We saw these birds both in Stockholm and Turku, with a few young. They behave somewhat threateningly if approached.

14. The Biology Museum (Biologiska museet) is housed in a building resembling an old wooden stave church, some of which survive mostly in Norway.

15. Unlike many other major European cities, Stockholm has a very small tramway system. There’s a reason for that. Sweden used to have left-hand driving up until 1960s. By this time, as all its neighbors had right-hand driving, and most cars sold in Sweden had steering wheel on the left anyway, Sweden decided to switch as well. They changed most of the road markings and signs in advance, then completed the switch on 3 September 1967, known as “Dagen H” (Swed. Day H, H for Högertrafikomläggningen, meaning “switch to right-hand traffic”). Everything went quite smoothly, but the one thing they could not decide what to do with were trams. It was not feasible to convert large tram systems existing by then in Stockholm and other cities to right-hand driving. All the trams had to be replaced with ones having doors on the right-hard side, for starters. So trams in Stockholm and a few other cities were shut down. Only Gothenburg and Norrköping (and the latter had a very small tram system anyway) somehow managed to keep their trams.

Since then, Stockholm had only a few suburban light rail lines. In 1991, a heritage tram line (route 7N) to Djurgården was restored, with vintage trams from the first half of the 20th century. By 2010, the line was extended, and mostly serves for regular public transit, with modern trams on route 7. That route 7 remains the only Stockholm regular tram line in service.

17. A service tram car, used for snowplowing, in front of the depot. It was built in 1907, yes, you’ve read that correctly.

18. At the southern shore of Djurgården. To the left is Gröna Lund amusement park, and in the middle, well, looks like it is the Viking Grace ferry we arrived on! It’s still moored at Stadsgården terminal, next to the cliffs of Södermalm.

19. Kastellholmen (Swed. Citadel Island), a small islet connected to the larger Skeppsholmen with a bridge. The building on the island is called Kastellet, which means simply Citadel. A small fort existed at this place since the 17th century, and the modern Kastellet building was constructed in 1848. The Swedish military ensign is raised there every day at 8 in the morning. It appears we’re actually a bit too early!

20. The Circus, actually used as a concert hall nowadays.

21. There are quite a lot of residential buildings in Djurgården as well. They must be ridiculously expensive, I imagine.

22. Another small island in Stockholm is Beckholmen (Swed. Pitch Island). This one is connected to Djurgården with this wooden bridge. The present bridge dates from 1992, but it was still deliberately built as a wooden bridge, the only one in Stockholm still open for all vehicles.

23. Apart from a few wooden houses, Beckholmen contains several drydocks, cut right into the bedrock. Two of the drydocks date to the middle of the 19th century, and the third and the largest one was built in 1925. All the docks are still in active use. Before the docks, the island was mostly known for tar production (hence the name), tar being essential for the construction of wooden ships.

24. A yacht in one of the drydocks. Dock walls are covered with graffiti.

25. Beckholmen is actually a perfect place to watch ferries at Stadsgården terminal across the waterway. We wandered here and managed to take nice pictures of the Viking Grace (now departing) by sheer luck.

27. One of the shipyard cranes at Beckholmen is painted like a giraffe.

31. An old Citroen in mint condition in someone’s yard.

32. Just a random slug, a pretty huge one though, some 8 cm long. We actually encountered a great number of these, not only in Djurgården, but throughout our entire Swedish trip (in Öland and Uppsala at least). Apparently, far from harmless, this is a terrible pest, devouring any vegetation in sight, accidentally introduced to Sweden in 1980s. The slug, called Spanish Slug elsewhere, is even nicknamed mördarsnigel in Swedish, meaning literally “Murder Slug”, because of their tendencies towards cannibalism. Having learned that, I now don’t feel quite as bad for accidentally squashing one of these at Öland. (It looked, sounded, and felt exactly as nasty as you can imagine.)

33. Djurgården seems to have its own bike rental facility. Overall, biking doesn’t seem to be hugely popular in Stockholm.

35. More black geese, with a chicken.

36. We returned to the Nordic Museum near the Djurgården Bridge. Its eastern wall is completely covered with ivy.

37. Lions in front of the Nordic Museum. Which remind me of my favorite Scandinavia and the World strip. Although lions are actually featured only on the Greater Coat of Arms of Sweden; the better known one just has three golden crowns.

39. Vasa Ship Museum seems to be the first Djurgården museum to open in the morning, at 10 to be precise. By now we were freezing cold, and would be happy to go anywhere, provided that place was warm and preferably served tea and coffee. Luckily Vasa Museum was indeed open, and even had a small restaurant. After tea, we went to actually have a look at Vasa the ship, what with having already paid the entrance fee and all. We didn’t actually expect this to be a particularly interesting museum, but it turned out to be so cool that I had to devote its own part to it. So, to be continued!